20+ Years of ExperienceGetting Compensation For Our Clients contact us now
Home
Practice Areas
Dallas Personal Injury Lawyer
Car Accidents
Why Do People Deny It's Their Fault?

Why Do People Deny It's Their Fault? 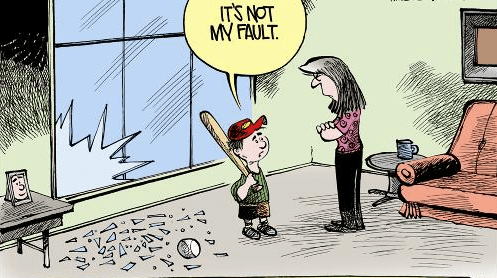 The Blame Game - Nobody Wants to Take Responsibility (Why People Deny It's Their Fault, When It Seems Obvious):

Cause of Collisions: Most people term a collision an "automobile accident". The problem with that term is that it gives the false impression that nothing could have been done to avoid it, that it was "just an accident". Collisions are usually not caused by "accidents" - there are usually several conscious unsafe decisions that lead to the collision - so in this respect the cause of the collision is typically due to bad decisions.

They are usually the result of someone consciously disregarding the law. The law is designed so that if a person obeys the law, wrecks won't happen very often. Unfortunately, many people decide the law doesn't apply to them, or is too inconvenient for them to follow at the moment, and cause wrecks, causing injuries, harms, losses and even death to their victims. Some people think it is ok to speed, change lanes without looking, not pay proper attention while using their (cellphone, radio, applying makeup, etc.).

Often, in today's society of shifting the blame - people who cause a car wreck victimize you a second time by trying to claim that they aren't responsible for the harms and losses they caused when they disregarded the law.

ABOUT THE LAW OFFICE OF DOUG GOYEN

The Law Office of Doug Goyen is located in Dallas, Texas. Attorney Goyen is a Dallas auto accident attorney representing people in car accident injury, truck accidents, premises cases where dangerous conditions cause injury, and various other personal injury cases. Attorney Goyen has been licensed in Texas since 1997. Call (972) 599 4100.